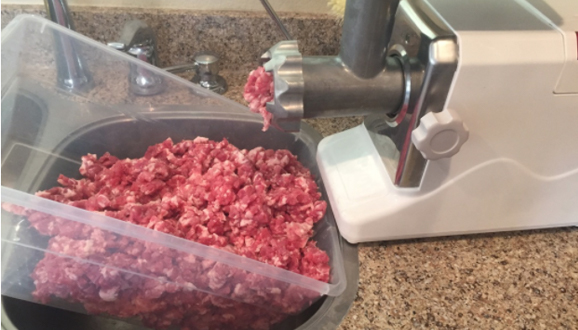 Prepared pet food became popular around 70yrs ago and has really exploded in the last 30yrs or so.  Before then dogs and cats thrived on raw meat, animals they caught, foraged, or food scavenged from humans.  Their digestive systems haven’t had time to evolve to efficiently consume today’s dog food.

After WWII, in response to the tremendous increase in consumer appetites, the human food industry created vast quantities of waste from slaughterhouses, grain mills, and processing plants. Pet food manufacturers – still in their infancy — immediately understood the unlimited opportunity of human food waste to their industry. By 1960, pet food companies had figured out how to mass-produce dry pet food (kibble) from the waste of human food production.  They then began marketing to humans with the message that feeding pets table and meal preparation scraps from human food was bad and pet food was the best thing you can feed your pet.  The food companies created the consumer demand for pet “convenience” foods, finding ways to make money off of their production waste.  Pet food manufacturers in the 1960s proudly claimed they were the original ‘recyclers’.

As the pet food industry grew larger and more influential, the biggest manufacturing companies have sown fear of raw and more healthy foods through their nutrition spokespeople to vets, who then pass that fear along to their clients.

What we see with the advent of processed pet foods, is a significant change in the general nature of ingredients in the diet. It is a simple commercial fact that meat protein is the most expensive component in any pet food, and as a result, there is always commercial pressure to keep meat protein levels to a minimum, thereby keeping costs down of the end product (and/or maximizing profits). Modern processed pet foods have adapted to these financial constraints firstly by significantly increasing the carbohydrate component of dog and cat foods – corn, wheat, rice, potatoe and other forms of carbohydrate are often the first and most major ingredient in many pet foods. Secondly, processed pet foods have also begun to substitute meat (animal) proteins with plant based proteins that are much cheaper – ingredients like Soya bean and lupins are cheap sources of protein that will increase the overall protein % on the label, but without the associated increase in cost. The problem with this type of substitution is that it does directly impact on the digestive environment of the dog or cat.

To be optimally healthy, dogs and cats need whole, fresh, moisture-rich foods. They don’t need grains, fillers, artificial preservatives, colors, additives, chemicals, excessive processing, or byproducts. All of which are found in the vast majority of today’s pet foods.  Although animals can eat some processed foods, for short periods, they aren’t designed to consume a lifetime of dry or canned diet without suffering health problems.

Given that cats and dogs have been eating raw meat and bones for over 40 million years, it just makes sense that this is what they will thrive on.

And receive coupons and special offers!